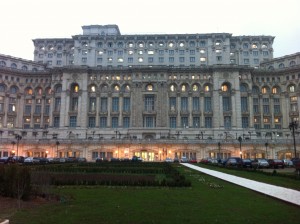 Christmas is a universal happening. Cities are decorated to the need and greed of consumers.  All done to make sure people buy, buy and buy again. Bucharest differs, in that respect, not of other cities. However. This Christmas Show stands in stark contrast with the less fortunate in this city. And there are so many. Bucharest counts 5,000 people homeless individuals and families, from very young to very old. My pal and colleague Harry Gras has been coming here for many years. His efforts to help out friends and homeless individuals in this city have been almost relentless.  His aim is to leave the money we have too much in the West. We traveled to Bucharest to prepare for a study tour in February 2012. A part of the registration money for that tour will be donated. Thus we support our colleagues and friends from SamuSocial. SamuSocial is an NGO (Non Governmental Organization). A club of 22 altruistic people, who row with minor belts 24 hours per day.

Once you leave the old center of Bucharest, the desolation in this city takes over. The demagogue Ceausescu is still widely represented, in the form of drab, similar residential bunkers and an outrageous Palace. The poverty is dripping of the roofs, windows and walls. The street scene is completed by tons of street dirt and hundreds of earmarked stray dogs. We visited the Missionaries of Charity. Two beautiful villas, situated in the midst of a residential area. You can only reach them by taking a muddy and bumpy road in a very slow pace. Brother Genaro allowed us to speak to some of the residents. Men with half, festering or broken legs and a much to young man affected by Alzheimer. People who can’t stay anywhere else. Because they have no one else in this world. One of the villas was empty, because Brother Genaro can no longer pay for gas, water and light.

We visited a hospital where people with infectious diseases are likely to find their Waterloo. At the front door they discouraged us to enter the worn off building. In earlier years I was vaccinated against TB and according to Harry you’re protected for life. So, I took the risk, because Ilie, a very dignified and friendly man, dressed in something that once was a bathrobe, shook our hands and invited us for a tour through the building. Then you are presented a glimpse of the appalling living conditions in this hospital. It is like entering a documentary. Sleeping rooms with six beds, with people who, judging by the color of their face, are not having a long life expectancy. Our guide had tried to lighten up the room a bit, with a few Christmas branches. On such a day a humble silence overtakes your thinking.

I have also seen the Ceausescu Palace, I believe. That is of such a size and arrogance, that it is difficult to understand that such a thing really exists. We did a tour of two hours and the guide stated that we only had seen 5% of the total building. At the main gates veterans were demonstrating against poverty.

There is an extraordinary thing about poverty. People who are affected by it share more and in better fashion. People are willing to donate their last meal to you. That is why traveling to Romania is compulsory for Western people and Health Care Workers. To witness the shear determination and passion of all the friends and colleagues we met in Bucharest. So we never forget that prosperity is not comprehensible.

In a restaurant that goes by the name of ‘ Moments ‘ Frank Sinatra sang “Christmas Dreaming” during our dinner in the evening. We are going to leave this city full of contradictions. Traveling home, to celebrate the feast of Christmas in the womb of our families. A few hours before we left we visited the state hospital for the second time. We donated some of our money to Ilie. To offer him and other residents the possibility of something that feels like Christmas. Images that will stay engraved on your retina.

I am confused and in need of contemplation.

I believe that is what Christmas is for.

The Street Journal of Haarlem, the Netherlands