Robert was not the kind of person you will miss, standing in line, waiting for the services that SamuSocial offers homeless individuals in Bucharest. He simply looks to well taken care of and you know instantly that there should be no reason for him to join the 5000 homeless individuals in this city. Medaline, the driver from the SamuSocial Outreach Team, took Robert to the main office, where I had the opportunity to speak too him for a few hours. His brother, Marius, was with him. Respectfully, he sat just behind Robert at first. I had to ask him to join us at the table. Robert started out by telling that he and his family, a mother, a sister and Marius had been homeless for 7 years. When Ceauceşcu ruled this country his regime disowned house owners to give these houses away to people in need of housing and members of the communist party. 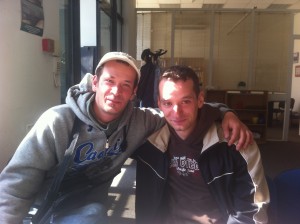 Robert is in no way a role model for someone  who is down on his luck. During this study experience we have seen people crawling out of holes in the ground during our night Outreach. We have seen and met a lot of people begging for money in most various ways. One young girl with a burned face even took her pants off and sat down on the street in a crowded shopping area to show us her totally burned body. It was hard to imagine her body was once a temple and carried the promise of new life. I saw an old Roma woman whom I had spotted in December 2011 too, when we came to prepare for this tour. Her legs showed the same outrageous wounds. Her situation seemingly did not get worse over three months.

All this, combined with the hundreds of stray dogs and dirt in the streets, you wonder why nothing is being done on a much wider scale to solve all these problems. How can a government expect that people feel proud about their city and country if neglect is a common thing?! It makes people ignorant and passive. At the same time I realize that reasoning back, in time, homelessness in Bucharest is not a ‘Bucharest thing’. We, as the World, are responsible for homelessness in any city. And we have to find ways to solve this global problem. A humble silence took over in the minds of members of my group. Every day. In the evening it took a lot of talking and reflecting to make this experience understandable and something to deal with.

Robert stated that it is probably going to take two to three generations to make the communist phantoms disappear. In his memory ‘lines’ have a special meaning. During the Ceaucescu period standing in line was a daily routine. People had to wait for almost anything. Food, public transport, clothes and cars. To become the proud owner of a Dacia you had to get a place on the waiting list. Then you had to wait for years to get a higher ranking on the same list. Once you had a car and thus a number plate, it was only allowed to drive your vehicle on certain days of the week. The number on your plate would tell you which days. On the last day of our study tour we took Robert to the ‘People’s Palace’. I could see he felt uncomfortable at some moments. Although he stated that this was ‘his house’ too, he had no reason to believe that he could benefit from that, at that very moment. But Robert is a special person. He has every reason to be low on self esteem and being cynical. Instead, I met a proud young man, trying to hold on to what life is meant to be. Reaching to your full potential, connect with people and strive for love and happiness.

Robert follows French and English classes at the local University. It is astonishing how many general knowledge Robert can demonstrate for a young man who on only one occasion left the city and country where he was born. He spent four months with the Red Cross in Spain, hoping to find a job. He left because of the 20% unemployment rate in that country. There was no way he could find a job. Robert believes in God. His favorite verse is Jeremiah, verse 10. ‘Don’t be afraid, because I am.’ He dreams of having his own Foundation. It will carry the name ‘Life Flame’. He wants to help people who are in the same position he and his family are at. And, Robert wants what every human being wants. A house which he can call home, a relationship and kids. One of my group members talked to a woman in the SamuSocial Drop In Center on the following day. After a while she found out that she had been talking to the mother of Robert, who spoke so proudly of her sons. There is no such thing as coincidence.

My group stayed in Bucharest for 6 days. We have visited several programs. Programs that are carried out by highly motivated workers and people with great determination to solve the problem of homelessness. To help people with multiple challenges. We were moved by their wholehearted actions. Our gratitude goes out to Aras, Obregia Hospital, Estuar, Parada, Casa Ioana and most of all, to our friends from SamuSocial. They have made this event into something one will never forget. The people of Bucharest understand the Art of Hospitality like no other nation. They have been suppressed long enough, to understand that solidarity is the key to a dignified life. Robert is showing us how this is being done. By Validation.